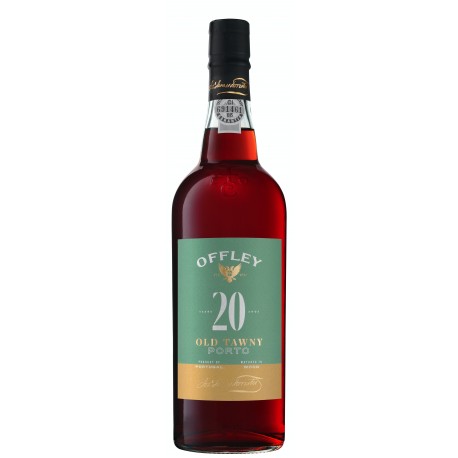 Offley Porto 20-Year-Old it's a smooth, ripe, caramel- and toffee-flavoured Tawny, with sweet fruit. Tastes young for a 20-year old, this still has good structure and is well integrated.

Winemaking:
Offley 20-Year-Old Tawny Port is produced by the traditional Tawny Port method. The hand-picked grapes are destemmed and crushed before fermentation at controlled temperatures, with skin maceration to extract tannin, colour and flavour. The addition of grape spirit at the ideal moment sets the balance between the wine's sweetness and bouquet. The moment of fortification is chosen by the winemaker following strict control of fermentation temperatures and densities according to the vine variety, maturation stage and the final sweetness required. After the harvest, the wines remain in the Douro until the following spring, when they are taken to Vila Nova de Gaia and enter Offley’s centuries-old lodges for ageing in oak wood casks. The final blend results from a selection of wines between 10 and 22 years of age, composed to maintain the consistency and character of this Offley 20-Year-Old Tawny Port.

Tasting Notes:
Offley 20-Year-Old Porto has a well-defined Tawny hue with orange tones. Its aroma is intense and complex, with notes of vanilla, cinnamon, pepper, ginger, cedar, plum and hazelnuts from the result of careful evolution over many years in cask. On the palate, there is a fine balance between sugars and tannins. The finish is delicate and lingering, with great harmony between concentrated fruits and flavours of extended oak maturation.