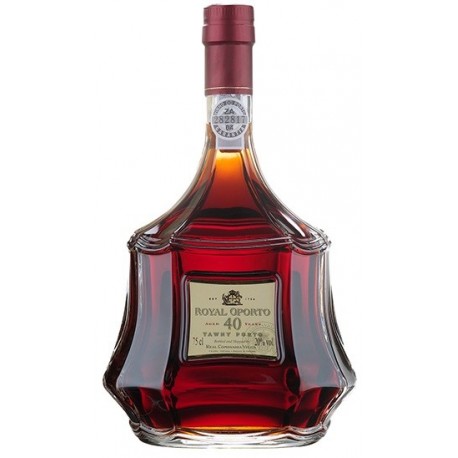 Royal Oporto 40-Year-Old Tawny Port is an aromatic and sweet wine with a fine and rich texture. It delights aromas of ripe fruit and marmalade flavours that give this fantastic Tawny Port an unusual subtlety. It is ennobled by a citrus caramelised acidity in a persistent finish.

Real Companhia Velha, founded by King D. José I, in 1756 was created mainly by the most important farmers of the Douro Valley, and by more influential people from the city of Oporto, who were entrusted with the task of supporting the cultivation Of the vineyards, preserving their production and natural purity, for a benefit of Agriculture, Commerce and Public Health. Among the Company's many public services, the most important event was the official demarcation of the Douro Valley. Out of curiosity during the French invasions in 1809, Napoleon Bonaparte's troops demanded wines from the Royal Old Company as part of their rations. In 1811, the British officer, Lord Wellington and his troops, at the time they settled in the town of Lamego demanded a supply of 300 barrels of wines from the Royal Old Company. In 2016 Real Companhia Velha celebrated 260 years of uninterrupted activity in the service of Porto and Douro.

Winemaking:
Royal Oporto 40-Year-Old Tawny Port is produced by the traditional Port method. The hand-picked grapes are destemmed and crushed before fermentation at controlled temperatures, with skin maceration. The moment of fortification is chosen by the winemaker following strict control of fermentation temperatures and densities according to the vine variety, maturation stage and the final sweetness required. The final blend results from a selection of wines between 8 and 44 years of age, composed to maintain the consistency and character of this Royal Oporto 40-Year-Old Tawny Port

Tasting Notes:
Royal Oporto 40-Year-Old Tawny Port presents a delicate and aromatic fragrance. It has mellow's aromas with overtones of oranges and raisins, nutty hints of toasted almonds. Its texture is smooth, well-integrated and extremely elegant, a sweetness of fruit, honey and soft spice. It has an extraordinary citric acidity and leaves the mouth very clean with long lasting flavour. The exceptional character of this fine Old Tawny Port deserved also an exceptional maturation process in the old oak casks, to acquire its distinctive pale medium amber colour with red-brown Tawny hints.