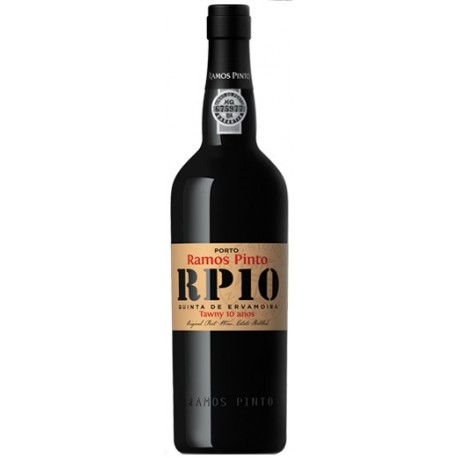 Ramos Pinto 10 Year Old is a blend of differents Tawny Port wines with an average age of 10 years with a brick-red colour, even golden shades. Its flavours remind us some spices, piquant and exotic's aromas. Its body and its richness of flavour transport us to the place where it was created Quinta de Ervamoira.

In 1974, José António Ramos Pinto Rosas, the then Chairman of Casa Ramos Pinto, was persistently looking for an estate on fairly flat land that would allow for mechanisation, as already at that time the lack of and the high cost of labour was being felt in the Douro and he bought the Quinta de Santa Maria, re-christened as Quinta de Ervamoira, which would become a model estate in the whole of the Douro region because he made from it, the first Quinta in the Douro to be planted vertically and by fields. Each field would grow a different variety, thus putting an end to the mixture of varieties in the vineyards. Respecting a tradition as old as its own history, Casa Ramos Pinto continued to give importance to the cultural aspects of the history of the Quinta de Ervamoira. It invested in the creation of an on-site museum for the public which was inaugurated in 1997. With the decision taken by UNESCO to give the Vale do Côa etchings the status of Heritage of Mankind, the Quinta de Ervamoira was given the privilege of becoming the first wine producing estate to use the title of Heritage of Mankind. Ramos Pinto Port Wines are produced in Quinta do Bom Retiro. In the case of LBV and Vintage, the grapes are trodden in the traditional "lagar" as this traditional technique allows for the juice of the fruit to be extracted more efficiently and less violently. After having concluded the first steps of vinification, the wines are transported to the historical wine cellars at Vila Nova de Gaia, where they undergo a long ageing process.

Winemaking:
Ramos Pinto 10-Year-Old Tawny is produced by the traditional Port method. The hand-picked grapes are destemmed and crushed before fermentation at controlled temperatures, with skin maceration to extract tannin, colour and flavour. The addition of grape spirit at the ideal moment sets the balance between the wine's sweetness and bouquet. The moment of fortification is chosen by the winemaker following strict control of fermentation temperatures and densities according to the vine variety, maturation stage and the final sweetness required. After the harvest, the wines remain in the Douro until the following spring, when they are taken to Vila Nova de Gaia and enter Ramos Pinto lodges for ageing in oak wood casks. The final blend results from a selection of wines between 9 and 12 years of age, composed to maintain the consistency and character of this Ramos Pinto 10-Year-Old Tawny Port.

Tasting Notes:
Ramos Pinto 10-Year-Old Tawny Port has richness and intensity of flavour. The sweet dried plums and prunes are steeped in caramel and just an edge of burnt acidity from wood. The finish is delicious and smooth.