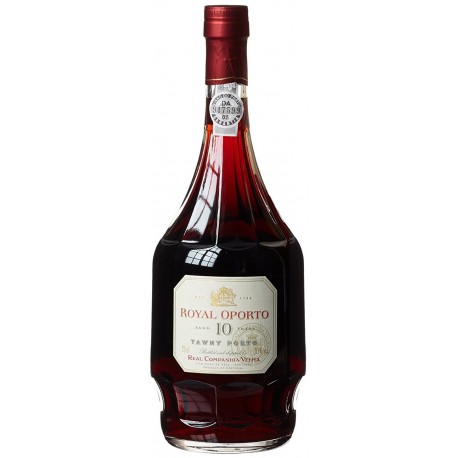 Royal Oporto 10-Year-Old Tawny Port is quite dark in colour. This Port still has plenty of good, 10-Year-Old fresh fruit flavours. Perfumed and delicate, it has a light sweetness and a good layer of fruit and wood acidity, leaving a dry aftertaste.

Real Companhia Velha history goes back in 1756, when Royal Oporto Wine Company, the way how company are known abroad, was founded on the 10th of September 1756 by Royal Charter of King D. José I, under the auspices of his Prime Minister, Sebastião José de Carvalho e Melo, the Count of Oeiras and Marquis of Pombal. Formed by the most important farmers from the Douro Valley, and significant figures of the city of Porto, the company was entrusted with the task of "sustaining the cultivation of the vines, conserving their natural production and purity, towards a benefit of Agriculture, Trade and Public Health". Amongst the Company’s numerous services in favour of the public, the most important event was the “Pombalina Demarcation of the Douro Valley” which was dictated between 1758 and 1761 by Real Companhia Velha’s Board of Deputies. In 1781, Royal Oporto Wine Company, took its Ports to the Baltic Imperium of Catherine of Russia, through large shipments carried in steamers freighted for this purpose. This was the beginning of a continuous trade between Portuguese and Baltic ports, and as a result of the Company’s action, Douro wine exports underwent considerable and successive increases. During the famed french invasions in 1809, Napolean Bonaparte’s troops demanded Real Companhia Velha’s wines as part of their rations. In 1811, British official Lord Wellington and his troops, at the time settled in the town of Lamego, demanded Real Companhia Velha’s wines in which a supply of 300 barrels was issued from the Company’s warehouses in Peso da Régua. In 2016 Real Companhia Velha had celebrated 260 years of uninterrupted activity in the service of Port and Douro.

Winemaking:
Royal Oporto 10-Year-Old Tawny Port is produced by the traditional Port method. The hand-picked grapes are destemmed and crushed before fermentation at controlled temperatures, with skin maceration. The moment of fortification is chosen by the winemaker following strict control of fermentation temperatures and densities according to the vine variety, maturation stage and the final sweetness required. The final blend results from a selection of wines between 8 and 12 years of age, composed to maintain the consistency and character of this Royal Oporto 10-Year-Old Tawny Port

Tasting Notes:
Royal Oporto 10-Year-Old Tawny Port is rich, mellow and smooth with a subtle fruity taste well integrated and balanced. As a result of a long and careful ageing in selected oak casks, it has developed a remarkable velvety flavour. This superb 10-Year-Old Tawny Port, patiently aged in selected old oak casks, is a classic example of the company's style of blending. During its ageing process, its young characteristics of fruit aromas and flavours begin to disappear and are replaced by subtle, mellow notes where it is possible to spot flavours of spice, nuts, liquorice, vanilla and fruit jam. At this time, the experience and knowledge of Real Companhia Velha's Master Port Blender is essential to predict future developments in these wines and anticipate the touch each Port will bring to the 10 years blend. The aromas and flavours of these wines are in the hands of the Master Port Blender, who seeks to create a yet another fine representative of Real Companhia Velha's Ports.