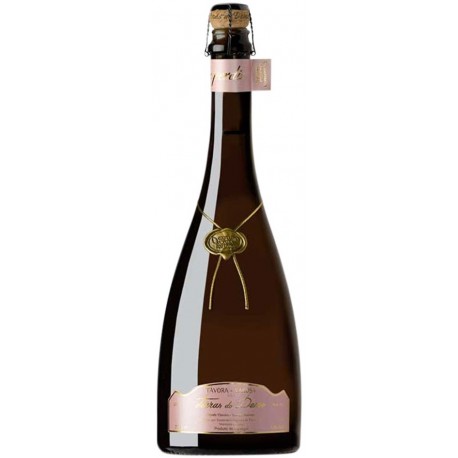 Terras do Demo is a delicious Rosé Bruto sparkling wine with an attractive touch of toast on this aroma. It's is a balanced and very rich with plenty of acidity and hints of red fruits that it provides a vibrant contrast. It is a remarkable sparkling wine rosé brut.

Terras do Demo Rosé Bruto is a sparkling wine from the demarcated region of Távora-Varosa, in Beira Alta, the oldest demarcated region of Sparkling Wine in Portugal, spread over 3500 hectares of land, distributed in eight municipalities - Tarouca, Lamego, Sernancelhe, Moimenta da Beira, Penedono, Tabuaço, São João da Pesqueira and Armamar. It's in this Region that the Cooperativa Agrícola de Távora brings together, with the approximately 1350 associated farmers, the grapes that give rise to this Terras do Demo Rosé Bruto. The Távora-Varosa Region might not be the most productive region of Portugal, but it's the region that produces more sparkling wine with the denomination of origin and quality assurance.

Tasting Notes:
Terras do Demo is an elegant Rosé Bruto, well-balanced sparkling wine, full of red fruits and with a beautiful, deep salmon-pink color. It is ripe, showing plenty of red berries while also having a crisp texture and plenty acidity. The aftertaste is bright and rousing.